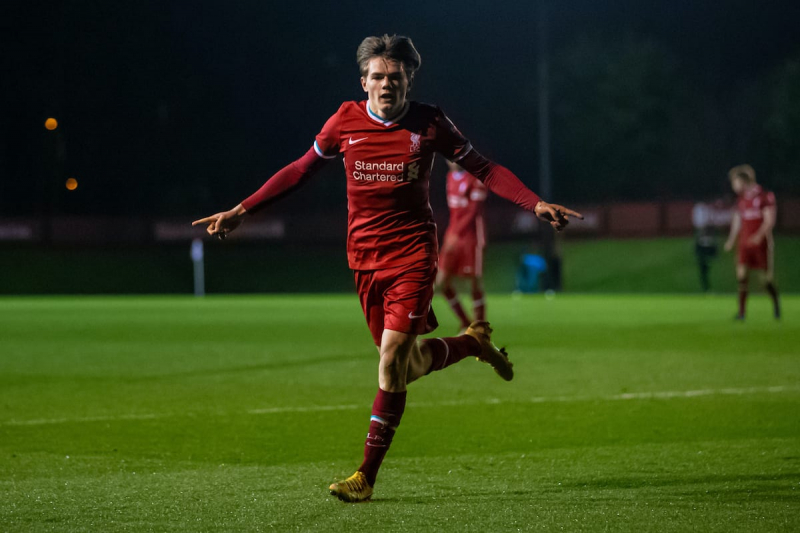 Ethan Ennis helped guide the Liverpool Under 18’s to the final of the FA Youth Cup last season but he could be set to turn his back on the Reds.

The Liverpool Echo has reported that Ennis has rejected a scholarship offer from Liverpool in favour of chasing a move elsewhere.

Liverpool have had great success with their youth academy in recent years, but this departure could be of great concern to both the academy and the senior team.

What position does Ethan Ennis play?

Ennis plays as an attacking midfielder, getting forward to create chances and score goals.

How old is Ethan Ennis?

What height is Ethan Ennis?

What boots does Ethan Ennis wear?

How good is Ethan Ennis?

Ennis shone at Under 18 level for Liverpool last season, with five goals in eight games and a hat-trick on the way to the FA Youth Cup final.

He has brilliant quality on the ball, with an eye for a creative pass but, most impressively, brilliant instincts in front of goal as a midfielder.

He is strong, physical and intelligent in his movement and adventurous with the ball at his feet, always looking to be on the front foot and making something happen.

There is a reason why Liverpool were very keen to hand him a new deal and why some of England’s top clubs are interested in his signature.

Manchester United and Chelsea are both battling to add Ennis to their academies, with both clubs appearing to be leading the race at different points of the saga.

Ennis posted on his Instagram account last week that he was spending the day at Chelsea’s Cobham academy base, but alternate reports have United as the leading candidates.

This would be a coup for Chelsea given the academy talent that they appear set to lose over this summer period, while United would no doubt revel in stealing one of the top young talents from Liverpool’s clutches.

When does Ethan Ennis’ contract expire?

Ennis’ contract at Liverpool has expired, and he rejected a scholarship proposal to remain at the club.

As such, Ennis is able to negotiate with any club he wishes, but due to his age a development fee will need to be paid to Liverpool by the club he signs for. If a fee cannot be agreed upon by the clubs, this would go to a tribunal to decide the amount of money owing.