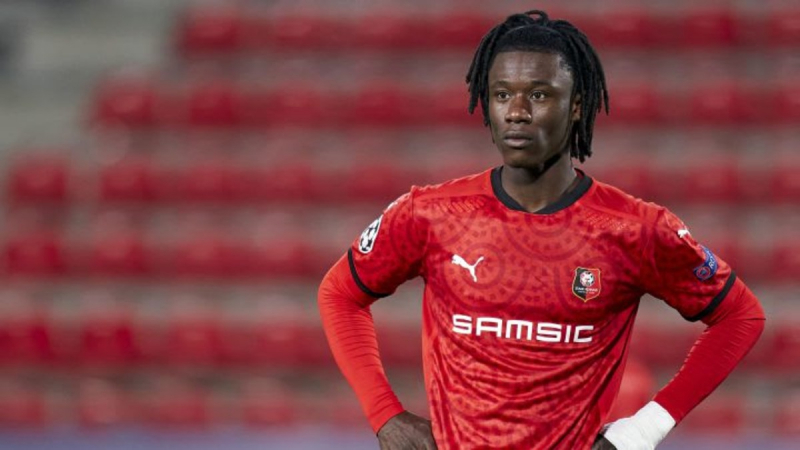 Eduardo Camavinga is a player closely linked with Manchester United and Paris Saint-Germain, but Rennes refuse to be backed into a sale.

The teenager is out of contract in under year, putting pressure on Rennes to make a deal.

However, president Nicolas Holveck continues to play it cool and says that there is no guarantee that the 18-year-old prodigy will leave the club this summer.

Speaking to RMC, he explained: “Everything is open, either for an eventual departure or for him to extend his contract. He’s not going to leave for nothing. We’ve had lots of talks, but nothing is done in one sense or another.”

Rennes, though, do want to make cuts to the size of their playing squad, having failed to match last season’s qualification for the Champions League.

“One of the priorities is to reduce our workforce,” Holveck added. “We have eight or nine players who will leave.”

How much will Rennes sell Camavinga for?

Setting a selling price in this unique market would be a little presumptuous- Nicolas Holveck, Rennes president

While it may well be that Camavinga departs for either Man Utd or PSG, Holveck is unwilling to put a price tag on what they hope to recoup for the player.

“Setting a selling price in this unique market would be a little presumptuous,” he said. “What is certain is that he has a certain value.”

Rennes have already been active in the transfer window, notably signing 19-year-old winger Kamaldeen Sulemana from Nordsjaelland. He was a player that Man Utd were closely following but the Ghana international ultimately made a €15 million switch to the Ligue 1 side.

Meanwhile, 21-year-old centre-back Loic Bade, who was an eye-catching presence in the heart of the defence with Lens last season, has joined the club for a fee in the region of €17m.

Two further additions in the form of left-back Birger Meling from Nimes and a No.6 are expected before the end of the transfer window.

There is little doubt, though, that all eyes are on Camavinga – and especially those of Man Utd and PSG.