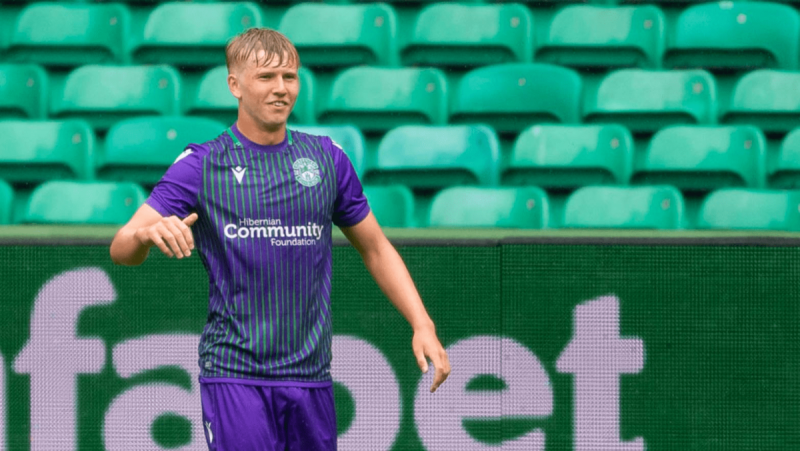 Hibs may be looking forward to a new season in the Scottish Premiership under Jack Ross but the club may need to prepare for a wave of offers for one of their top talents.

Josh Doig has only just broken into the first team at Easter Road, but his performances in Edinburgh have already attracted interest from bigger clubs in Scotland and in England.

At the moment it seems as though Arsenal are at the front of the queue for the young, Scottish full-back.

So what do fans of the Premier League side need to know about Doig’s talents?

What position does Josh Doig play?

After coming through Hibs’ youth teams, Doig has spent most of his senior career to date marauding down the left flank in one form or another.

That has, mostly, meant playing as a more traditional left-back for Hibs and in many ways that’s his most preferred position. And, undoubtedly, the role that bigger clubs like Arsenal would ask Doig to play if they signed him.

However, the young Scot has played as a left winger or a left wing-back at times and could easily play in either of those positions if his team played with a back three.

How old is Josh Doig?

How good is Josh Doig?

Although Doig hasn’t even played 50 games for his club yet, the left-back is already considered an extremely exciting prospect in Scottish football.

After breaking through at the Easter Road club last season, Doig quickly established himself as one of the best left-backs in the Scottish Premiership. And in many ways the 19-year-old talent is ready to make the next step in his career.

This was made abundantly clear when the defender was nominated for the ​​SFWA Young Player of the Year award at the end of last season.

Naturally, Doig’s talents will always be compared to fellow Scots Andy Robertson and Kieran Tierney but in many ways the young Hibs talent is proving to be just as promising.

Do Arsenal need a new left-back?

Like most players that burst onto the scene in Scottish football, Doig has found his name linked to a whole host of Premier League and English Championship clubs.

The most persistent reports in England suggest that West Ham, Leicester City, Leeds United and Watford have all shown some interest.

However, it’s perhaps the Premier League giants Manchester City and Arsenal who are most likely to offer the £5 million Hibs will reportedly demand for the defender if he were to move this summer.

Who is Josh Doig’s girlfriend?

Josh Doig is not dating anyone publicly.